On June 14,2018, Huayuan completed shore pulling of a submarine pipeline by using HDD Technique for the first time domestically, and innovated a brand-new construction technology for onshore/offshore pulling of submarine oil/gas pipelines. 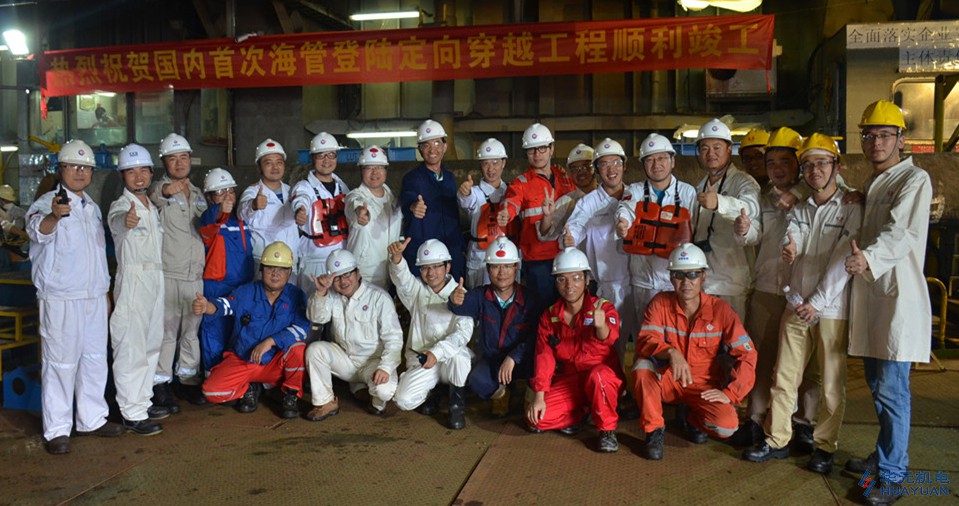 Gaolan Branch of CNOOC Yacheng 13-1 Submarine Pipeline is the first project whose shore pulling was successfully completed by using Horizontal Directional Drilling(HDD) technique, resolving such difficulties as large difference of elevations,complicated topography along the coast, obstacles of live pipelines in vicinity, and huge waves of the sea; reducing cost and construction time; ensuring the accomplishment of subsequent follow-up works. The Client CNOOC and the EPC Contractor gave a high appraisal to Huayuan for the excellent performance.

Gaolan Branch of CNOOC Yacheng 13-1 Gas Pipeline, is one of CNOOC’s projects for developing the Gas Fields in the South China Sea. After completion of this project, Gaolan Terminal will be connected with the Gas network of Hong Kong, eventually forming vast gas transmission networks on the sea which can link up the Eastern gas fields and Western gas fields, and connect Eastern Terminal, GaolanTerminal and Hong Kong Terminal. Gas sources and their transmission then can be flexibly, efficiently deployed in large scale.

The HDD entry site is located within Gaolan Terminal, which belongs to parts of CNOOC’s deep-water gas field in the South China Sea; the daylight-point site is located at the seabed. HDD crossing chainage length is 876 m, with 100 m of maximum vertical depth, the level difference between the entry point and daylight point is 60.6 m, the φ610mm×δ22.2mm pipeline is coated with 3LPP anti-corrosion layers.

Huayuan company was the contractor of the HDD ashore crossing works of the submarine pipeline, whose work scope included surveying, design and construction. Facing the unprecedented working situations, without any experiences to follow,Huayuan valiantly participated the challenges, persevered in technical innovation, and made full use of its superiority of technological advantages. According to different strata formation, different stages of pilot drilling was carried out, and when enlarging / smoothing the borehole, forward reaming method was used. Lastly with the assistance of pipe-laying ship, the pipeline was directly pulled back into the borehole. Some brand new working methods or techniques were innovated, e.g. conquering such difficulties as high abrasiveness and hardness of the granite / quartz vein, which wore the drill bits severely; and cuttings beds formation due to drilling fluid Lost Circulation when forward reaming; and eccentric borehole formation at the interface of hard and soft zones.